A ladder is a structure designed for climbing that consists of two long side-pieces joined at uniform intervals by rungs or steps.  It’s important to use the right tool for the job, and that includes ladders, which come in different types and sizes for different applications.  It’s also important to exercise extreme caution while using a ladder, as a fall from a ladder can lead to serious injury and even death. 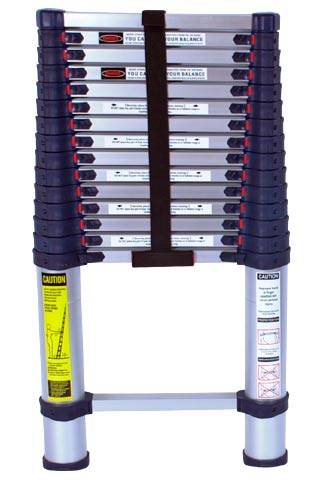 Some common causes of ladder injuries include:

Some basic safety tips will help prevent injuries.  And safety begins with understanding the types of ladders available and their common uses.

According to the American Ladder Institute, there are nine different types of ladders. Not all of them are used by inspectors, however.

The following types of ladders are used commonly by inspectors:

Ladder levels attached to the bottom of the side rails can provide stability and support on uneven surfaces, but the use of these devices should be limited to those whose expertise and confidence in ladder use is advanced.  For most users, placing the ladder on a flat, even surface is the safest method for use.

If it’s not possible to safely brace an extension ladder against a stable or even surface at the top, a straight ladder stabilizer can be used for this purpose.

PARTS OF A STEP LADDER
PARTS OF AN EXTENSION LADDER

Safety Tips for Inspectors and Homeowners

Before mounting a ladder, always check the following:

While on the ladder, always:

For multi-inspector firms, someone trained in the proper setup and safe use, transportation, storage and maintenance of different types of ladders should be appointed to train the rest of the crew.  Also, always use proper mounting hardware on vehicles used to transport ladders, and follow precautionary measures if your ladder exceeds the length of your vehicle so that you don’t cause an accident or violate any traffic codes.

Some inspectors don’t think they’re giving their client a full inspection unless they walk the roof. The fact is, you’re performing a general home inspection.  In most situations, your inspection of the different home systems will not be as complete as a specialist inspection. Just as you won’t be pulling a furnace apart to get a good look at the heat exchanger, you won’t be laying tall ladders across very steep roofs, or suspending plywood across very fragile roofs. That’s a specialist inspection.

You can examine the roof using binoculars from various points on the ground, or from the top of a ladder at the roof edge.  The bottom line is:  To perform a home inspection to the Standards of Practice, you are not obligated to walk a roof. You have alternatives.

For example, Inspector Outlet offers its Spectoscope, a special 28-foot telescoping pole that integrates its tripod-mounted camera with your own smartphone, allowing you to see high-definition digital images as you photograph them.

Inspector Outlet’s Spectoscope allows you to
view the digital camera images above on your smartphone below.

The Spectoscope mounts on 6-foot sections so that you can customize its height up to 28 feet.

In summary, common sense and some basic safety practices can help prevent accidents and injuries caused by the improper or unsafe use of ladders, or the use of defective ladders.  Also, don’t forget that there are excellent alternatives to using ladders, which can be quicker and safer.